So, after quite a few comments on my Friday post asking what a "princess sole" is, I thought I should pop up a quick post to explain!

Essentially, a princess sole is where you knit the sole of the sock so that the knit side is on the inside of the sock, against the skin.

So, your foot rests on the smoother side: 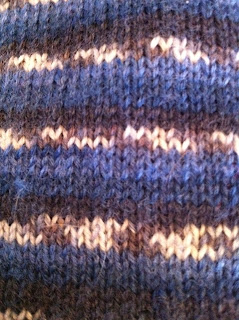 While the rougher purl bumps are on the outside: 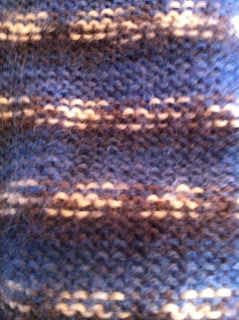 Does that make sense?! The princess part obviously comes from the old princess and the pea story *laughs*

I decided after knitting my first socks that I would knit socks this way for the boyfriend as he has sensitive feet and I wasn't sure if he'd like the feel of walking on hand knit socks. At this point I didn't know what they were called, I just figured that I should purl the base of the sock to make them more comfortable for him.

Unfortunately I can't remember on which blog I read about it, but I recall seeing a post about a pattern called the Daylong Socks, where the pattern was designed so that you didn't have to purl the entire sole. Good plan I thought ;)

In the end, although I bought the pattern, I didn't really follow it. I just knit the top of the foot and the leg in rib and knitted the sole, then flipped them inside out *laughs* The pattern does have a more involved approach, so that the toes and heel look better, but I figured that they're inside a shoe anyway, so it doesn't matter too much ;)

Boyfriend tested out his first sock and came to the conclusion that he does indeed prefer the knit on the inside (and was surprised how much of a difference it made).

So, I'm not an expert on the topic, and I don't know where the idea or the name originated, but I hope it's a bit clearer now!
Posted by pinkundine at 09:14

Hi, thanks for letting me know you stopped by :D

pinkundine
I'm 29, living in Hertfordshire (UK) with my cunning boyfriend. When I'm not knitting, crafting or blogging, I'm a freelance writer. You can find my professional website at www.nataliehowells.com 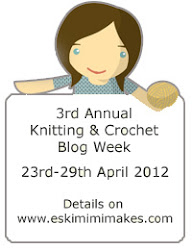